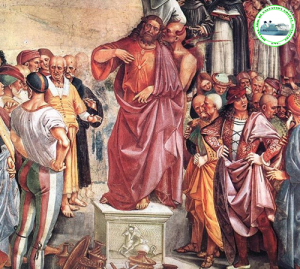 This is a great and worst experience that no flesh can stand expect you paid for your salvation through your own blood. Revelation 13:14. “And deceiveth them that dwell on the earth by the means of those miracles which he had the power to do in the sight of the beast; saying to them that dwell on the earth, that they should make an image to the beast, which had the wound by a sword, and did live”.

3) How will antichrist rise to power?

4) Is there any escape from the power of antichrist?

5) When will antichrist take over the world?

6) What can be done as a believer in order not to partake in this?

Satan final opponent of Christ and Christian. The Antichrist is a man of sin, the son of perdition, he is the beast and the wicked one. His image of the beast which was described in the book of (Daniel 8) is a ruthless dictator, he will be a world dictator in which everyone that does not partake in the rapture will worship or purchase their salvation through their own blood (no more Grace). He is called the son of perdition 1st John 2 vs 18.

Neither let him which is in the field return back to take his clothes.And woe unto them that are with child, and to them that give suck in those days!But pray ye that your flight is not in the winter, neither on the sabbath day:For then shall be great tribulation, such as was not since the beginning of the world to this time, no, nor ever shall be.And except those days should be shortened, there should no flesh be saved: but for the elect’s sake, those days shall be shortened.Then if any man shall say unto you, Lo, here is Christ, or there; believe it not”.

HOW DID ANTICHRIST RISE TO POWER?

The Antichrist rise to power after the rapture? He will control and be empowered by Satan. He will strongly oppose Jesus Christ and God’s program for the human race Daniel 11:21:  “And in his estate shall stand up a vile person, to whom they shall not give the honor of the kingdom: but he shall come in peaceably, and obtain the kingdom by flattering”.

He will come to power through deceit, Lies he will pretend to come with peace but later reveal his true identity i.e beast that is controlled by Satan. Antichrist is the ultimate enemy of Christ, a born beast. He will display norms of logic that will make the whole body of the remnant of those that are not rupturable to believe in him.

Through a counterfeit miracle, he will distribute the mark of 666 and pollute the people. It has been predicted before his coming that he’s level of lawlessness would be known to be compared.  His also known as a man of sin by exceptional power that is known to be compared.

Through this power, he will form an autocratic and totalitarianism system of government. The reign of Antichrist will display the level of cruelty the world has ever witnessed. 2 Thessalonians 2:9-13  Even him, whose coming is after the working of Satan with all power and signs and lying wonders,And with all deceivableness of unrighteousness in them that perish; because they received not the love of the truth, that they might be saved.And for this cause God shall send them strong delusion, that they should believe a lie.

That they all might be damned who believed not the truth but had pleasure in unrighteousness.But we are bound to give thanks always to God for you, brethren beloved of the Lord because God hath from the beginning chosen you to salvation through sanctification of the Spirit and belief of the truth.

IS THERE ANY ESCAPE FROM THE POWER OF ANTICHRIST?

In my view as a prophet Olumuyidele Daramola Felix. My Apocalyptic vision concerning the reign of Antichrist, his mission is saturated by tribulations. I foresee an imminent disaster, bandage, destruction to the highest level. This should not be the desire of a Christian to witness a  tribulation period. This will make life unbearable for those that taught that they can pay for their sin through their personal blood. The ugly incident will Involve a trademark of 666. Without the mark you cannot buy and sell. Worst experience!!!. During the reign of Antichrist there won’t be any alternative therapy.

The image is not easy to withstand, those that attempt it physically will fall before it. There is nothing a believer can do at this point in time than to give their lives for the faith. 2 Thessalonians 2:14-17. “Whereunto he called you by our gospel, to the obtaining of the glory of our Lord Jesus Christ.Therefore, brethren, stand fast and hold the traditions which ye have been taught, whether by word, or our epistle.Now our Lord Jesus Christ himself, and God, even our Father, which hath loved us, and hath given us everlasting consolation and good hope through grace,Comfort your hearts, and establish you in every good word and work”.

WHEN WILL ANTICHRIST TAKE OVER THE WORLD?

Antichrist will take over the world immediately after the rapture. Daniel 9:24-27: “Seventy weeks are determined upon thy people and upon thy holy city, to finish the transgression, and to make an end of sins, and to make reconciliation for iniquity, and to bring in everlasting righteousness, and to seal up the vision and prophecy, and to anoint the most Holy.

Know therefore and understand, that from the going forth of the commandment to restore and to build Jerusalem unto the Messiah the Prince shall be seven weeks, and threescore and two weeks: the street shall be built again, and the wall, even in troublous times.And after threescore and two weeks shall Messiah be cut off, but not for himself: and the people of the prince that shall come shall destroy the city and the sanctuary, and the end thereof shall be with a flood, and unto the end of the war desolations are determined.And he shall confirm the covenant with many for one week: and in the midst of the week he shall cause the sacrifice and the oblation to cease, and for the overspreading of abominations he shall make it desolate, even until the consummation and that determined shall be poured upon the desolate”.

Based on the predictions of Daniel. The Apostasy of antichrist will stand out as the best among men.  He will deceive the people with signs and wonders. This will ignite the establishment of the reign of Antichrist. There wouldn’t be any alternative therapy for tribulations and wickedness to the highest order from the man of sin. Those that are loyal, truthful will constitute an enemy of God on earth. This will find favor in the presence of Antichrist. In my point of Opinion, as been said by me often and often that if Jesus Christ is the child of God so also Antichrist is the child of Lucifer.

WHAT CAN BE DONE AS A BELIEVER IN ORDER NOT TO PARTAKE IN THIS?

3) Obedience to the word of God.

5) Don’t  abuse the dispensation of Grace 1st John 2:15-17. “Love not the world, neither the things that are in the world. If any man loves the world, the love of the Father is not in him.

LEAVE A REPLY ABOUT THIS ARTICLE:mailto:daramolaolumuyidele@gmail.com

Do not love the world or anything in the world. If anyone loves the world, love for the Father is not in them.
1 John 2:15
DailyVerses.net