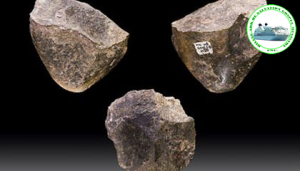 Art, creativity, nature, this and many more are the beautiful handiwork of God.  Everything he created is meaningful and significant to the benefit of mankind. When talking about darkness, Darkness can be defined as the opposite of light. Nature especially when you’re in a dark room where there’s no light. The best example is a thick forest in the night without races of light you can not trace your way back home. Yet it’s important unto God, is a period of rest to man while is a busy period to other creature. No wonder in creation he separated the darkness from light. Genesis 1 vs 4

Its usefulness was made manifest when God was about to save the Israelite from the hands of the pharaoh by using darkness to u advocate Pharoah from the host of Israelite while Israelites were given Light.

Geo-configuration of the world proves beyond doubt even though biblical expression that there is wealth in the dark. Isaiah 45 vs 3.

So also stone can also be defined as the hard substance found on the ground e.g throwing a stone into the lake yet it has is own usefulness. In building, construction, they are different types of stones. They are stone that is more valuable than the other stone depending on their usefulness. We need to take this into cognizance that God created humans with different dispositions, potentials, value, credibility is not equal. So we need to discover the stone that is inestimable among humans.

As have rightly said within the wider scope of human activities under the sun, I prophet Olumuyidele Daramola Felix discovered that the following stones are of immense importance in the life of man:

If the kidney stone lacks the credibility to function the life of the person is in jeopardy. In every lineage someone is born to lay down the most important stone that will break down every foundational curse and restructure all non-functional glory. So they become functional beyond expectations.

This is another stone of immense value to mankind. Although it has a melting point, the melting is 38° ferrite and 39°centigrade. The name is tangential to the name of the most important planet in the space.

Among other stones, the precious stone is of immense value, profitable to the global community. Stone of such importance is called diamond stones, gold, and sapphire.

1) Discovery of stone of wealth in the dark.

2) Socio-economic importance of the precious stone in the dark to mankind.

3) The hand that laid the stone in our family is the messiah.

DISCOVERY OF STONE OF WEALTH IN THE DARK:

Our wants are so numerous so we are insatiable in search of resources that we make us meet up with our demands. Biblically it is established by God that he will give up nations as a ransom for our prosperity Isaiah 43 vs 3.

In life application, the richest person in the family carries the vicarious liability of the family. Among the children of Jesse, David is the precious stone so also his the stone of wealth in the dark not until he was discovered during the war between the Philistines and the Israelites  2nd Samuel 21:25.

So also the stone that sent goliath to the grave beyond was picked among so many other stones.

If David was not discovered Judah wouldn’t have become the political and economic center of Israel today.

Dear brethren, we need to discover our stone of wealth in the dark.

This has given birth to the Canterbury of a new nation called Israel. Operation “Saul kills in 100, David kills in thousands” 1st Samuel 18:7-14. The aftermath effect of jealousy, intrigues, rivalry.

Without Jesus there wouldn’t be churches. Although churches have been existing before Jesus. He said “I have not come to destroy the old testaments but to establish it” Matthew 5:17. The significance of this statement in correlation with the speech of our Lord Jesus Christ gave birth to the new generational churches, gospel, Pentecostal. Also to tell the world that the new testament and old testament are of immense benefit.

Hence Jesus is a stone of reconciliation, salvation, and integration.  So he said unto Peter upon this rock I will build my church and the gate of hell will not prevail. Matthew 16:18.

SOCIO-ECONOMICS IMPORTANCE OF THE PRECIOUS STONE IN THE DARK TO MANKIND:

Economist, Adams smith, and other great philosophers like Aristotle believe that no nation can exist in Isolation.

Hence we trade across the coast known as international trade centered on balance of payment. The global village depends on the exchange rate to survive our numerous wants and needs. If Jesus Christ does not leave Nazareth to another part of Jerusalem. He’s fame will not go abroad. As Christian we need to come out of stagnancy because the world is not static in nature hence it’s a dynamic world. We need to work for our stone of wealth in the dark.

Some parts of the world today survived through the items they recovered from the dark and processed as in material things. Most francophone countries are vast in the production of wine which has become their livelihood while others discovered crude oil, diamonds as the source of their livelihood.

In my views, I will say let’s constitute a “SCHOOL OF SOLID MINERALS” and search through the spiritual devices for our stone of wealth. As soon as we possess the stone, it brings out the value in every sphere of life and makes the world more convenient and habitable for mankind. Christianity is light, is a socio-economic resourceful organization.

THE HAND THAT LAID THE STONE IN OUR FAMILY IS OUR MESSIAH:

In every family lineage there’s a mesh, a liberator that will liberate the family from poverty and wretchedness.

Obed begat Jesse, Jesse begat David (Ruth 4:22). From the lineage of Jesse and David here comes Jesus Christ. They both laid the foundation for success in their own generation. Samuel laid the stone in the family of Elkanah.1st Samuel 1 vs 1-18.

Apart from Samuel, others of his siblings are not known. If not Joseph that laid the stone of testimony in Egypt, the family of Jacob would have perished in Egypt. For the sake of Joseph Israel was given the land of Goshen in Egypt.

Someone must be a vision carrier that laid the first stone, second stone and discover the stone of wealth; He is the messiah of the family.

LEAVE A REPLY ABOUT THIS ARTICLE:mmailto:daramolaolumuyidele@gmail.com

Yet to all who did receive him, to those who believed in his name, he gave the right to become children of God.
John 1:12
DailyVerses.net